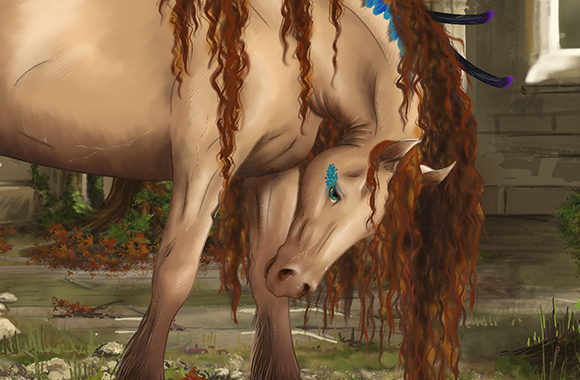 Animax is utterly in love with Thepholea and will do literally anything to protect “his” mare – loyalty should be his first name.  When Alex and Kate find them at a slaughter auction there was no question that they had to rescue them both, because clearly they had no hope of only saving one.  Their previous caretaker had died in mysterious circumstances and the son wanted nothing to do with the horses that had been transferred to him in the probate. Thus they had been sent to the worst and saddest place in the world through no fault of their own.

When they are brought back to the Abbey they are turned out with the other wild horses since it is presumed that they are unbroken and unhandled, only to find them both standing at the feed room door the following morning expecting breakfast, rugs and treats.

With Animax’s flashy Emblem mutation Kate finds herself drawn to him as a replacement for her beloved and lost dressage horse Maxim, so she starts working with him in the hopes that maybe with some time and effort he can help fill the void in her schedule, and heart – as long as Thepholea isn’t too far away – and there is a pair of step ladders for Kate to use to get on him.  He is a careful, graceful horse despite his size and lives up to his Grecian name of being as much a Philosopher as the great Pythagoras himself.