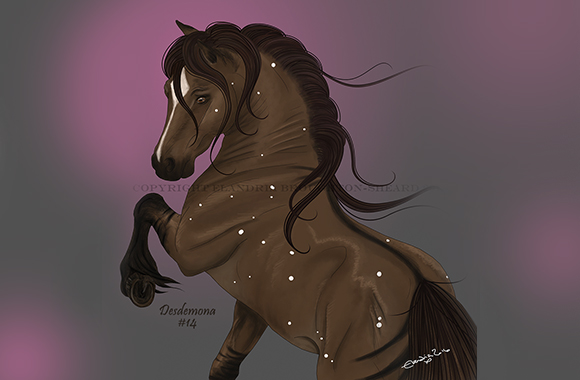 On her shoulder there is a ‘scar’ in the shape of a pentagram.  It’s not so much of a scar really, as it was not the result of an actual wound but simply placed there by Nyx’s magick.  This symbol ties her to Nyx, whom she loves and is trying to return to.

She is a quiet, calm mare. She never overreacts, unless something happens to prevent her on her Path to Nyx.  She is also very loving and gentle, although it is hard to tell, for she is often somewhat detached from those around her.  She prefers solitude and absolutely hates crowds though she can be persuaded to join the main herd as they settle in the twilight, that being said, when she is with just the other older mares, she can also be persuaded to spend time in the Abbey.

Desdemona is considered by all the other mares to be lead mare, loved for her wisdom and kindness. Kindred spirits with Sephrenia.