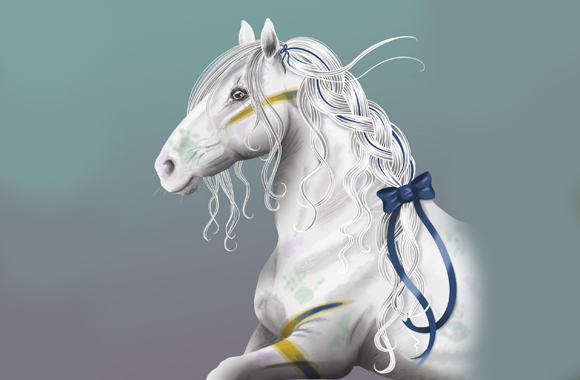 Tolmiros is more highly strung than his best friend Thrascias, and tends to get a little carried away by ghosts in the bushes and monsters hidden in puddles. Giant ones.  Usually with tentacles.  He loves jumping and hones this skill by jumping fences, ditches, barrels, hay bales, the occasional horse or dog – just to keep it interesting.  His owner Sherbert hopes to one day corral her shiny pale boy and take him cross country jumping, but she has a long way to go before she can try.

Tolly is usually not far from Rasa or Jupiter whom he has developed a fondness for as they both have the same insane attitude to jumping and in turn since she hangs out with Cosira they usually form an unruly group. He’s also usually covered in chalk markings from Sherbert, since being white he is rather like a giant piece of paper waiting to be coloured in. So she obliges, and he puts up with it.  We don’t mention his ribbon. Ever.