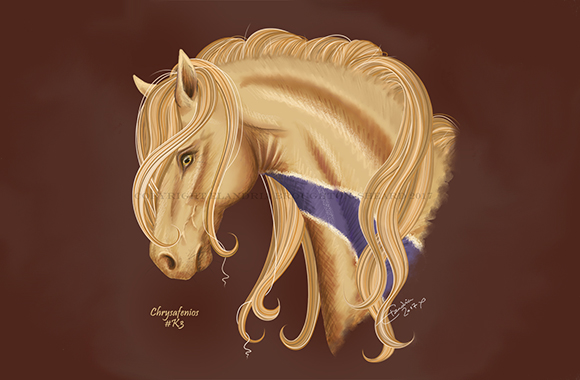 Chrysa’s story is a one with a sad beginning. Her dam suffered complications after her birth and passed on into the everlasting dream. Tolmirós her sire found a willing mare who was still nursing to feed and care for her until she was weaned. Her admiration for her sire for not abandoning her, and her respect for the other “elder” horses at Tincture Abbey and Golden Hoof Stables keeps her natural exuberance in check.

She hopes to grow into a mare who can lead the others much like how Sephrenia and Desdemona do for the rest of the young horses.

She has a desperate crush on Kobalos, though she would never tell, and had she been born a human would have the same problem with crushing on her rider Alex. She dotes on her scruffy, “couldntcareless” “notafraidofanything” human, and together they make a formidable team on the eventing circuit.